Summerton Mill is a tumbledown watermill nestled deep in a beautiful valley. And 'when the waterwheel turns at Summerton Mill, a little bit of magic takes place and, for a little while - everything goes back to how it used to be'.

At the end of each episode, 'as the water level drops back down, the big old waterwheel slows and eventually - stops. And Summerton Mill, still beautiful in its tumbledown state, goes back to being a home, just to the wild animals, the birds and the plants'.

Each episode features life in the Summerton Valley. Dan lives in Summerton Mill with his faithful old furry friend, Fluffa. Mrs Naybhur and Dr Naybhur live up the track in Mill Cottage. And then there's Mousey-Tongue, the laziest cat in the whole world, the little round 'yellow spinner' chickens, Francoise the French cow with hairy armpits, and a collection of small scampering millfreaks which are a bit of a cross between hedgehogs and rabbits.

As Frazer Diamond of www.toonhound.co.uk says:

'Oh yes, just when you thought they didn't make series like these any more, "Summerton Mill" emerges from sepia to charm the socks of you. There's no grand design here. No one's thinking about Tee-shirt sales, or target demographics. Dan, the Mill, Fluffa and their strange friends exist just because they can, just because they should. And we, in turn, can watch and treasure an instant classic.'

Summerton Mill was created and produced by Pete Bryden and Ed Cookson from their Oxfordshire studio.

The first series was animated by Pete Bryden, Ed Cookson and James Cleland.

Character voices and narration were provided by Silas Hawkins whose father, Peter Hawkins, voiced such classics as The Woodentops, Captain Pugwash and Bill and Ben, the Flowerpot Men.

The BBC commissioned thirteen five minute episodes of Summerton Mill as inserts for its flagship studio preschool series Tikkabilla, which used the Playschool format. After a few months, Summerton Mill was given its own time slot. At it's prime, Series 1 was being shown within Tikkabilla and also in it's own slot on BBC1 and BBC2 with several broadcasts per day.

The production team then went on to self-fund and create Series 2 - a further thirteen five minute episodes.

Despite being sold to over eighty-five countries around the world, the thirteen Series 2 episodes were never broadcast in the UK. 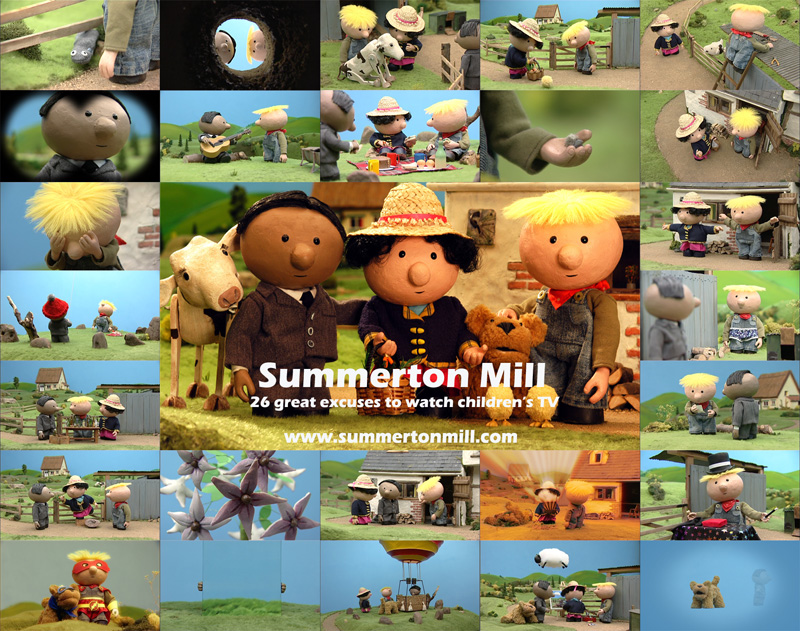 Interesting Note: unfortunately, we managed to delete our Google Account and the twenty-six episodes which were available on YouTube have all gone, so we're in the process of re-uploading them. The Bottle Organ had 18,821 views, and all those statistics have disappeared into the ether - grrr!

Anyway, here it is. We'd love to hear from you, so please do leave us a message.